The IRON HORSES MC International was founded in 1966 by American Gi´s of the unity “Old Ironsides”. This Unity was stationed in the O´Darby Barracks in Fürth. Foundation place and also the first clubhouse was an inn in the Waldstreet of Fürth, immediately compared with the American barracks. This inn belonged to the foundation president Charlie an American Army Sergeant and his Wife

The name of the club IRON HORSES was leant to the army unity (Iron-Ironsides) and the club purpose (HORSES-motorcycles) the club colors are descended yellow-black also from an old American army badge which held a horse head.

Especially by the Connections and transfer of the American GI´s the club expanded in the course of the years in several German Citys and in many lands of the European foreign country. By American “homecomers” one also led a Chapter in the USA.

The current Chapter FÜRTH was founded in 1976 as Hellbrothers MC. One maintained since then a narrow friendship to the IRON HORSES. Thus one also became a next tenant of a clubhouse of IRON HORSES MC Nürnberg. Serval parties, the known “friendship parties”, were aimed together.

Then in 2001 the Hellbrothers MC joined as a logical result of the long-standing respect to the IRON HORSES MC.

Since then there is at the real foundation place Fürth again a Chapter of the
IRON HORSES MC.
Also foundation president Charlie was still a member and since 2006 actively in Chapter Fürth, till he died at 6th of November 2008. With it he wants to show the attachment to his 2nd native country to Fürth (to the United States)

The Chapter owns for many Years own clubhouse in the area of Fürth in which one greets all bikers of the most different complexion. 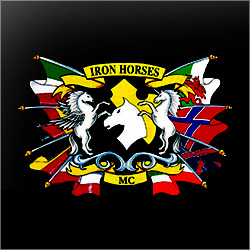